Effects Of Whalling On The Great Whales (chart)

The figures below represent estimates based on the sources cited.

January 2007. Whaling is a Japanese obession this was quoted from Ayokawa Japan. It was also quoted by Ms Okubo, it's not because the Japanese do not like being told what to do, it's because the Japanese do not like being told what to eat by foreigners". That is the shocking truth. Every year the Japanese Government sends out it's fleet of ships in defiance of the Protection regulations granted to the whales inside the official Southern Ocean Sanctuary and with no emotion. The Japanese harpoon and slaughter well over 1200 whales a year, a staggering number of deaths of endangered species. Some of the out to the Antarctic like the Nisshin Maru have a huge crew of approximately 147 and carry a massive fuel load (diesel and oil) of over 1.5 million litres plus ammonia and chemicals. Their intentions are very serious! KILL WHALES!

In March 2007 the Japanese slaughter-house ship, the Nisshin Maru caught fire, one of its crew on the factory slaughter ship died. On board the Nisshin Maru they found 500 endangered whales slaughtered and butchered. If it had not been for the fire there would have been at least 960 harpooned and slaughtered whales. 460 whales were lucky and are now happily swimming in the sea, but lets feel very sorry for the 500 whales that suffered an agonising death and did not make it.

Norway sends out its ships and shockingly harpoons and slaughtes an unacceptable government quota of over 1000 whales a year. The Norweigen Government also permits the harpooning and slaughtering of our endangered whales just 200 nautical miles off the United Kingdom coast, equivalent distance from London to Leeds.

Denmark slaughters over 1100 whales a year.

Greenland is also a slaughter of whales and so is the Faroes, Iceland, South Korea, St Lucia, The Grenadines and St Vincent.

When a poor innocent whales body has been invaded by a deadly harpoon, the pain inflicted is so severe that it is unimaginable. The whale lets out a scream  like you have never heard before. The harpoon charge then explodes inside the innocent body of the whale and then cruel lethal type knives shoot out plunging ever deeper into its now tender body. The sea surrounding the helpless whale is then covered in blood. Salt water from the ocean then rushes into the defenceless whales agonizing body, causing it to gasp for air as it struggles to try to stop itself from drowning.

The cruel inhuman whale slaughers then knot and tie a heavy rope just in front of the struggling whales tail flipper. The poor stressed, frightened and shocked whale is then dragged and pulled up the side of the ship where often a further securing hole, is then cut into its tail fin. A rope is then put through this open wound and the whale is left hung upside down at the side of the ship, its vulnerable head banging on the side of the ship and bouncing off the waves as the ship is being driven forward to try and find yet another whale. 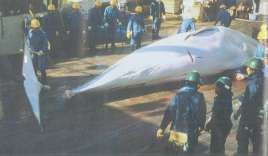 These poor whales are mostly still alive and just waiting for their fate, which is to be transported to the floating factory slaughter house ship, where the severely injured whale is then hauled up at the back of the mighty ship with huge chains and then dragged onto the deck to be slaughtered.

Long handled sharp knives are then brought out and the whales proud and beautiful tail fin, probably still moving from side to side, is mercilessly and ruthlessly chopped off. When this severe blow happens, you may hear a sad and uncomfortable groan from the defenceless whale.

Look what they've done! This whale was probably still alive. Just a helpess little soul in a big ocean, captured and slaughtered in the Antarctic Whale Sanctuary, by Japanese Government slaughter gangs under the deceit of Scientific Research (photo by Mark Voiter)

The inhuman slaughterers then further plunge their knives into its stomach, causing the whale unimaginable pain (equivalent to a human having an operation with no anaesthetic). The broken hearted whale then gives itself up to an agonising and undignified death. It was the last straw.

Throughtout the whales ordeal, all it could do was lie there covered in blood and riddled with pain defenceless and innocent and looking at the unscrupulous barbaric men, who were slowly hacking it to piecs bit by bit. It was helpless, but still clutching onto life, in its mind it was still hoping and trying to get away - but it was in vain.

Suddenly the final blow, it was the final curtain.

We are determined to stop the Japanese whaling ships entering the Antarctic Whale Sanctuary ignored by Japan. We feel, that they are illegally stealing whales under the pretence of Scientific Research from the protected sanctuary areas of the Antarctic Southern Ocean. This is an area where whales have been given their freedom. Nobody should be allowed to capture and mercilessly slaughter them. Nobody! They should be free to enjoy their world in peace and tranquility.

Some whales have larger more complex brains than humans.

Japan has been accused of handing out approximately half a billion pounds in aide to small Caribbean and Pacific contries, to gather support in the International Whaling Commission for over turning the 1986 ban on all whaling.

Email of fax the Prime Minister of Japan:

Please email urgently and regularly every single country who is for whaling. Write and tell each country how cruel whaling is and to stop it NOW!

Japan has been accused of handing out over £400 million in aide to smaller nations in the Caribbean and Pacific and recently approximately £500,000 to Loas in South East Asia in order to get their support for over turning the 1986 ban on whaling which was introduced by the International Whaling Commission. Fortunately the Japanese lost at the International Whaling Commission conference in Anchorage.

GreenEcoPeace relies solely on Donations & Donations for merchandise from people like you. Please donate and help us to wipe out this filthy bloody business. Thank you.

Together we can win.