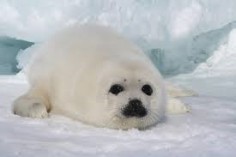 Right now, baby seals are being brutally clubbed and shot for their fur off Canada’s East Coast.

What happens to these defenseless pups is horrible. Many are wounded and left to suffer in agony, impaled on metal hooks and dragged across the ice. Still more are clubbed or shot and allowed to escape into the ocean, where they die slowly.

The footage they gather will be critical. The European Union ban on seal product trade has saved more than one million seals from a horrible fate in recent years. But the EU is revising the regulation and special interest groups are pushing hard to weaken it.

We must show decision makers that the cruelty continues and a strong ban remains crucial. Just as importantly, we need to convince countries in Asia to prohibit their trade in seal products.

This year, a group of generous donors gave HSI $125,000 as a matching gift challenge – and we just received an additional $23,000. Please give generously so we can meet this challenge of $148,000 to save seals.

Ever since I personally visited the harp seal nursery with HSI, I have been in awe of this amazing and unique wildlife spectacle.

We simply cannot allow it to be turned into an open air slaughterhouse each year. 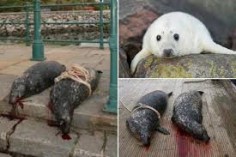 Thousands of seals are being shot dead in a secret cull around Britain's coast.

The seal is the wild sea dog of our ocean and should be fully protected, as our pet dogs are.

On beaches, in front of horrified children and visitors, seals are mercilessly slaughtered.

Seal cubs are being left to starve to death, as their mums, suffer the death of slaughter and yes, by British fish farmers and fishermen.

People eating Scotch salmon, should realize the price seals are having to pay.

The seals are protected under EU law, but the EU allows the seals to be slaughtered in their very own sea by the fishing industry. It doesn't make sense.

In Scotland a license is needed to kill the seals, but in the rest of the UK no license is required and seals are killed if it is thought that they are getting to near the fish.

Anywhere where there is salmon netting or angling and in many cases fishing, there is likelihood of seals being slaughtered.

There are acoustic deterrents (pingers) on the market to help deter seals, but the fishing industry, make various excuses and say, that the bullet is cheaper.

GreenEcoPeace and conservationists say, there is no justification to shoot seals, they are beautiful (we all like to see them) and the slaughter of seals is cruel, as many are left seriously injured. Seals are destroyed just to protect the fishing industry.

It is estimated that thousands of seals are slaughtered in the UK and particularly, around Scotland's coast. 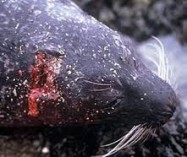 Scottish Government grants consent for the killing of up to 239 Grey Seals and 24 Common Seals, in the Moray Firth. Every year approximately 4000 seals are killed by the Salmon Industry, for shear greed and money.

These are our wild UK sea animals and no different, to the killing of a wild tiger, rhino or elephant.

The Scottish Wild Salmon Company said, in front of police, that they use bullets to kill seals, because ADD's (pingers), are too expensive for their business model. 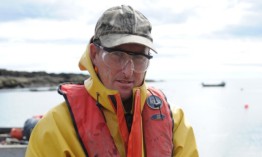 Fishing is not permitted at the weekend and the Scottish Wild Salmon Company, already face charges, from flouting the rules.

A gang, from Scottish Wild Salmon Company (3), one armed with a riffle, attacked a conservation reporter at the port.

The Scottish Wild Salon Company after being under pressure from dedicated conservationists, have now removed all its nets from the Gardens town area and have withdrawn from the town.

Our colleagues are staying and watching to make sure, that no more seals, our UK mammals are killed.

GreenEcoPeace is undercover and watching. The seals belong to the UK and are not for salmon fishermen to kill, for greed, for profit.

Many seals are being found bludgeoned to death or shot.

Fishermen, Fish Farmers and Fisheries, we believe, are those responsible for killing our seals. The culture of killing our seals must be stopped. The British and Scottish governments must take action to protect our seals from all deliberate killings.

Seals are no threat to fisheries or fish farmers.

Fisheries and Fish Farmers, can protect their stock, by using non-lethal methods.

The act that is in place now, does little more than provide fish farmers and other fisheries interests, with a license to shoot seals. A license to kill.

Recent research by the Sea Mammal Research Unit (SMRU) at St Andrews University, has revealed what is described as a "frightening decline" in the population of wild, common (harbour) seals, off the Scottish and English coast.

The population has halved in some area's of Scottish waters, in just the last six years.

Kerry McCarthy MP says, "I'm sure many people will be shocked as I was, to learn, that seals are being shot in the UK and Scotland and will take the view, that better protection for seals is needed. I would like to see measures, included in the marine and coastal access bill and the equivalent Scottish legislation, to strengthen the existing law and ensure, that our seal population are protected".

Seals should have the same protection, as whales and dolphins.

A greedy cruel seal slaughter, no respect for life just money. Its sadly their last goodbye! goodbye world. A short time after this photograph they would have both been slaughtered (photo by IFAW)

New Foundland slaughters bring in more baby seals to the main slaughter boat for skinning alive. Seal Killers shoot baby seals, leaving them wounded and then gaff hook them to the slaughter boat

After being skinned alive, baby seals skinless bodies left eerywhere on the ice, a bloody sight a bloody mess 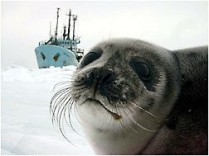 The Farley Mowat ship in the background owned by Sea Shepherd, was later illegally confiscated at gunpoint by the Canadian government in International Waters for daring to film the seal slaughter.

This disgusting filthy business of barbaric slaughter, has got to stop.

GreenEcoPeace with Tommy an English Bullmastiff our mascot, along with IFAW, Sea Shepherd and campaigners protesting against the despicable seal slaughter, outside of the Canadian Embassy, No 5 Trafalgar Square, London, W1.

Follow your conscious and please write or email to:-

and tell them to stop this mass killing, of our innocent endangered seals, now! Thank you 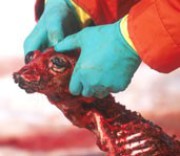 A baby seal skinned alive, what wrong has this poor little fellow done to deserve this. (photo by IFAW, S Cook)

THE CANADIAN GOVERNMENT IS FOR SLAUGHTERING SEALS

The Canadian government insists that the annual  seal hunt is an animal production industry.

The Canadian government say’s “seal and baby seal killings are not a pretty site, its just an abattoir on ice” but the unbelievable levels of suffering would not be tolerated by any other animal industry in the world.

THE UNITED KINGDOM GOVERNMENT IS AGAINST SEAL SLAUGHTER

A British newspaper wrote a story about the seal hunt. The members of the United Kingdom Parliament was so shocked about these horrific allegations of seals being skinned alive on the now blood stained ice flows off Canada’s east coast, that they took a stand against the hunt, with an early day motion (EDM). A formal demonstration of solidarity on a particular issue that British MP’s can sign onto. 160 MP’s signed on, which resulted in a formal debate in the House of Commons on the issue. MP’s issued strong statements condemning the hunt as cruel and unjust.

The British foreign office minister Mike O’Brien conducted the debate by stating that the United Kingdom would use its diplomatic weight to pressure the Canadian government to end the seal hunt. Several nations have taken action to stop the import of seal products in Europe. In January, Belgium became the first EU Nation to pass a national ban, followed by Germany’s announcement to institute its own ban. The UK Government recently announced it would support the introduction of an EU wide ban. Unfortunately this will take time. We can with your support, put pressure on the Canadian government to stop seal slaughtering.

Over 600 videos have been submitted showing that there has been no regard for Canada's marine mammal regulations. The videos have been sent to the Canadian department of Fisheries and Oceans. These horrific abuses include, skinning and bleeding of live seals, stock piling dead or dying seals, dragging live seals across the ice with sharp ended steel hoods and shooting seals and leaving them to suffer. To date there has been no response from the Canadian government, or cruelty charges made against the seal killers. In my opinion these seal killers are nothing but murderers. But worse, they cut up their victims while still alive!

Sample Emails that may help you.

GreenEcoPeace relies solely on Donations & Donations for merchandise from people like you. Please help us to wipe out this filthy bloody business. Thank you.

Together we will win!