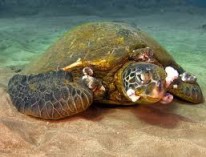 Endangered Sea Turtles Are Getting Deadly Tumors, and We’re to Blame

In sad news for sea turtles, scientists have found that runoff from cities and farms in Hawaii is causing debilitating and deadly tumors, which are believed to be the leading known cause of death for endangered green sea turtles.

Scientists from Duke University, the University of Hawaii and the National Oceanic and Atmospheric Administration (NOAA) teamed up to study what’s causing the tumor-forming disease Fibropapillomatosis, which is clearly a major problem for sea turtles.

The study, published this week in the journal PeerJ, found that nitrogen runoff is ending up in algae that sea turtles eat, which is causing the tumors to grow both internally and externally on their eyes and flippers. According to NOAA, these tumors can interfere with their ability to eat and other essential behaviors, while tumors on their eyes can cause permanent blindness. While it’s a major problem for green turtles in Hawaii, it’s also been found in other places and in other species of sea turtles, including loggerhead, olive ridley and flatback turtles.

Sea Turtles may be Carnivorous (meat eating), Herbivorous (plant eating) or Omnivorous (eating both meat & plants). The jaw structure of many species indicates their diet.

Researchers continue to study the feeding habits of Flatbacks. There is evidence that they are opportunistic feeders that eat seaweeds, cuttlefish and sea cucumbers.

Some species change eating habits as they age. For instance, Green Sea Turtles are mainly carnivorous from hatchling until juvenile size; they then progressively shift to a herbivorous diet. 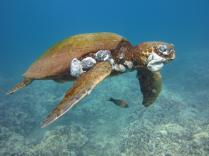 Nesting areas are becoming scarce due to beach development and disturbances. Kemp's ridleys only nest on one beach in the entire world: on a remote beach in Mexico near the village of Rancho Nuevo (about 161 km or 100 miles south of the Texas border). In 1947 scientists witnessed an arribada of more than 40,000 Kemp's ridley turtles in one day. In the 1960s numbers were reduced to less than 5000 turtles. In 1973 the largest arribada contained only 200 individuals.

Although the populatio of olive ridley sea turtles is the most in the world, their major nesting beach at Gahirmatha in Orissa, India is in jeopardy. The Government of India is planning to develop a major fishing port and processing plant 10 km (6.2 miles) from the critical nesting beach. More sea turtles nest on this beach than on any other beach in the world.

Nesting females and hatchlings are disturbed by the presence of rubbish on nesting beaches. Pollution impedes its crawl up the beach, a female returns to the sea instead of nesting.

The noise and activity of people on the beach may also cause females to return to the sea instead of nesting.

Some sea turtles die when they ingest rubbish. Leatherbacks are especially susceptible to ingesting plastic, mistaking it for jellyfish.

Thousands of sea turtles drown in shrimp nets each year. Sea turtles forage in waters where commercial shrimpers trawl. In 1947, 5000 US shrimping trawlers worked in the Gulf of Mexico. That number increased to 15000 full time and 40,000 part time trawlers by 1989.

Artificial lighting on beaches may misrepresent the time of day to turtles attempting to nest. Most turtles are noctural nesters and to a turtle that has not yet come ashore to nest, a brightly lite beach may signify daylight and inhibit nesting.

Hatchlings can become disoriented by city and street lights when trying to find the surf. Many young turtles actually head away from the ocean and toward parking lots. These animals may be eaten by predators or crushed by cars. Some die from exposure.

Some people illegally collect turtle eggs for food and for their alleged aphrodisiac effect.

Sea turtles are hunted illegally for their meat and shells, which are used to make combs, eyeglass frames, aphrodisiacs and curious. The fat of Green sea turtles, boiled with cartilage called Calipee, make a popular soup, which led to the decline in Green sea turtle population numbers.

Deforestation may indirectly threaten sea turtle nests. Costa Rica has one of the high

est deforestation rates in the world. Some researchers fear that without the forest to draw up ground water, the water table will rise beneath the beaches and drown nests.

Propeller and collision injuries from boats are not uncommon. These types of injuries are more frequent in areas with a high level of recreational boating, such as South Florida, the Florida Keys and the United States Virgin Islands.

All eight species of sea turtles are listed as threatened or endangered on the US Endangered and Threatened Wildlife and Plants list. It is illegal to harm, or in any way interfer with a sea turtle or its eggs.

The Convention on International Trade in Endangered Species of Wild Fauna and Flora (CITIES) is an international treaty developed in 1973 to regulate trade in certain wildlife species. CITIES protects all species of sea turtles. The US and 115 other countries have banned the import or export of sea turtle products.

At a cost of millions of dollars, the National Marine Fisheries Service developed the Turtle Excluder Device (TED).

The TED is a small, metal grid trapdoor inside a trawling net that allows shrimps to pass to the back, while the turtles escape to safety before becoming entrapped or entangled.

Since 1989, federal law required this device to be installed on all the nets of all US fishing trawlers, working in areas populated by sea turtles.

Nests can be protected from predators by placing screens over them. Eggs laid too close to the water or in erosion zones can be relocated to safer areas.

Legislation is underway to allocate government funding for the Archie Carr National Wildlife Refuge on the east coast of Florida, between Melbourne Beach and Vero Beach. Full protection of the refuge would cost a total of $90 million dollars, of which $50 million dollars would come from state and local sources. As of 1994, federal funding has reached $7 million.

The governments of Nicaragua and Costa Rica have established and are striving to expand, national parks and biological reserves where sea turtles forage and nest. Tortuguero, Costa Rica maintains the largest Green sea turtle rookery in the Caribbean. Local economics is no longer based on turtle harvests, but on tourism. More than 15,000 visitors are expected each year.

Sea turtles are found in warm temperate seas throughout the world.

Adults of most species are found in shallow, coastal waters, bays, lagoons and estuaries. Some also venture into the open sea. Juveniles of some species may be found in bays and estuaries, as well as at sea.

Migration habits differ not only among species but also among different populations of the same species. Some sea turtle populations nest and feed in the same general areas; other migrate great distances.

Total population figures are often unknown because juvenile and male sea turtles do not come ashore and are difficult to count.