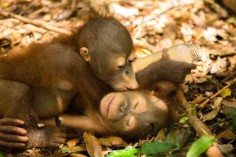 Orangutans, Executed Having Committed No Crime

How could anybody want to harm these wonderful, amazing, defenceless orangutans. But there's some who do and some who will.

All of these orangutans (closest to humans) were found abandoned, miss treated, trapped in cages, or they had probably witnessed their mums being mercilessly slaughtered. 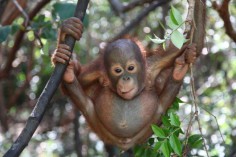 One of the young  orangutans, a little young female, was found to have shocking scars from a nasty machete wound, in which her mother, must have been brutally slaughtered, trying to defend her young. It must have been distressing and witnessed, by the young orangutan.

Many thanks to Karmel and Argitone for their wonderful, never ending, tiring work, nursing and helping orangutans, so that they can adjust back to wildlife.

Lets hope that the orangutans have a safe and happy life, although, danger from the cruelty of man is never very far away.

Orangutan Translates As "Man Of The Forest" and this is not surprising, when you think how closely related we are. The only primate closer to us, is the African Ape.

The Orangutans are large Apes, that live in South East Asia (on the islands of Borneo and Sumatra). They have senses very similar to ours, including hearing, sight, smell, taste and touch and they live for approximately 30 to 45 years and have a high level of intellegence.

The orangutan is the largest animal to dwell in trees. The natural home of the orangutan, is the leafy area's of the sout east Asian Rainforests, in Sumarta and Borneo.

Soon the poor orangutans which are so close to humans, may be facing extinction. 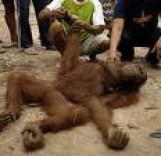 Death of Orangutan, for Palm Oil

Orangutans, are endangered species and are decreasing in numbers at alarming rates, probably only 49000 are left in the world. Further serious problems are, baby orangutans are being caught and sold as pets, this must be heart breaking for the orangutan mum. The orangutans have been on our earth for approximately 70 million years and they should be respected. 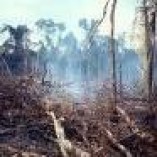 Orangutan Survival and the Shopping Trolley

Many of the biscuits, margarines, breads, crisps and even bars of soap that consumers pick off supermarket shelves contain an ingredient that is feeding a growth industry that conservationists say is killing the orangutans.

The mystery ingredient in the mix is Palm Oil - the cheapest source of vegetable oil available and one that rarely appears on the label of most products.

Palm Oil is grown on land that was once home to the vast Borneo and the natural habitate of the orangutan.

The International Union for Conservation of Nature estimates that the population has declined by 50% in recent decades and the Indoesian government admits that 50,000 orangutans have died as a result of deforestation.

A BBc Panorama investigation into clear-cutting in Indonesain Borneo, the island it shares with Malaysia, found that the thirst for land on which to plant Palm plantations is encroaching on areas that the Indonesian government has deemed to be off limits.

Nuisance - The orangutans, displaced as the trees of old growth forests are burned and at times killed by workers who see them as a nuisance in the logging process, are not the only victims of the runaway growth in Pal Oil, scientists say there is a wider environmental price being paid. 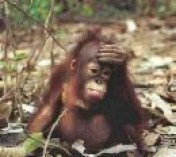 A sad orangutan in its burnt out surroundings

It has been identified that the draining of ancient  peat lands to make way for Palm Oil is a global threat, it has lead to massive amounts of trapped methane and carbon dioxide being released into the atmosphere.

As a result, Indonesia is the world's third largest emitter of greenhouse gases, behind only America and China.

This illegal logging is widespread and includes major suppliers to the UK's food and household product market.

"We want the Indonesian government to immediately announce a moratorium on further deforestation...beginning with peat lands."

Willie Smits, a former advisor to the Indonesian Ministry of Forestry turned environmental campaigner, said of the findings: "This is criminal, this should not take place. It means there is no hope left for the most endangered sub-species of the orangutan in west Kalamantan."

He said the wider environmental issue of greenhouse gases can no longer be overlooked by both manufacturers and everyday consumers.

Many of the big manufacturers who buy that oil via European Wholesalers say that while they are starting to find oil from sustainable sources, they are not yet in a position to trace the origin of all of the oil they use.

Curently, only 3% of the world's palm oil is certified sustainable, meaning it comes from plantations that pass an environmental and social impact test.

Many have joined the Roundtable on Sustainable Palm Oil (RSPO) scheme set up to promote certification of where palm oil originates.

Others have set amitious goals to use sustainable oil by 2015 or earlier, but the RSPO amounts to a 'greenwash' because those commitments are unenforceable on the ground.

Bulk oil from a variety of plantations including that of Duta Palma Group that the BBC found to be illegally clear-cutting is mixed together and shipped around the world and sold on to manufacturers behind everyday products.

Duta Palma declined to comment on the BBC's evidence of illegal deforestation.

Consumer Pressure - Hilary Benn, the Secretary of State for the Environment, Food and Rural Affairs, told Panorama the time is right for consumers to put pressure on manufacturers, demanding to know which of their products contain Palm Oil and assurances that it comes from a sustainable source.

Many manufacturers including industry giants Unilever and Proctor and Gamble, say their recipes can change and the amounts and types of oils they use can vary from week to week, making more detailed labels unworkable.

However, Sainsbury's supermarkets had earlier taken the decision to not only single out Palm Oil on the ingredients lists of their own brand products, but to state directly that it is from a sustainable source.

Recently Unilever, the UK's largest user of Palm Oil in products that range from Dove soap to Pot Noodles, Knorr soups and Flora, terminated a large contract with a supplier called Sinar Mas, because of reports it was destroying high conservation value forests.

Unilever has told Panorama that while it may have used oil from Duta Palma in the past, it intends to overcome its supply system problems so that it no longer uses oil from the producer.

Secretary Benn said, "I think it's really about what consumers can do because the most powerful message that can be sent to companies is from their consumers about what it is they want to buy," he told reporter Raphael Rowe, citing the demand for free range eggs in the UK as an example of consumer influence.

Mr Benn said the participation by UK retailers and manufacturers in the Roundtable on Sustainable Palm Oil is a step towards ensuring that Palm Oil is traceable and therefore increases the chances that it can be certified sustainable.

To help you understand Palm Oil ingredients that go into your shopping trolley, Rainforests are mostly illegally cut down and burnt and orangutans slaughtered and burnt. Companies that are mostly using Non Certified Palm Oil in their products: