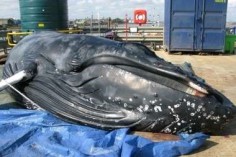 A young almost 10mtr Humpback whale was found dead, stranded and beached, in the River Thames, close to Dartford Bridge in Kent.

Sadly it appears that the young humpback may have died of starvation.

The young humpback was first spotted on Thursday off Gravesend, but unfortunately there were no further sightings until the whale was sadly found dead on Saturday.

Apparently the young humpback was estimated to be about 2 years old. It appears that the young whale may have been confused by noise or because climate change, may have caused a shift away from its normal migration roots.

Our marine mammals are really suffering from ocean noises.

Noises from Military Activities, Shiping, Underwater Constructon, Oil & Gas Production and so on. These noises alter the mammals behaviour and often lead to serious injury and death.

Mammals such as whales rely oon their special noises and sounds for direction and survival and communication, but when their sounds get interfeared with, by sounds from interferance from human kind, projects, the mammals can suffer perament hearing loss and injury to their hearing.

Sounds can travel along way in water and mammals such as whales, have been around for almost 200 million years and they use their sounds and rely on their sounds for survival.

Many man made noises in our oceans are not monitered, which is shameful, if they were, it would really help our mammals and our endangered giants (whales) of our sea's.

Lecturer on the Arctic, Michael Nolan who photoed this amazing sad face, said that he regularly goes to the area and he has noticed that the glazier has been disappearing, at the rate of approximately 150 feet a year.

We all have to realise now that global warming is not something we just hear about, it is seriously happening now and is and will be in the future, affecting you and more seriously, will affect your children and their children's children.

If you want to help to do something about it, start now!

If you don't know how to go about it, but want to help, please donate to GreenEcoPeace and tell us what you would like to do to help and we will represent you and keep you informed by email.

Together we can influence and we will.