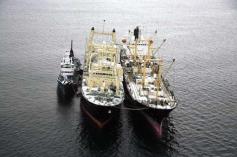 It's the first time in years that the Japanese Whaling Fleet has not left port later than the 19th November. Normally the massacre whaling fleet starts to grab it's first whales in the Antarctic Southern Ocean Whale Sanctuary around the 20th December, it's then that the Japs start to shoot live ammunition into the innocent sentient whales, their screams can be heard for miles, but the Japs don't care.

This illegal commercial whaling, goes on for around 3 months and at the moment intervention by Paul Watson's conservation crew at the ready, is the only means of protecting our whales in the Antarctic Southern Ocean whale Sanctuary. Many thanks from GreenEcoPeace for the dangerous work that he does with his 3 ships.

It seems that the Japanese supply ship, that supplies fuel and supplies to the whalers formally the notorious Oriential Blue Bird, which was banned from the Antarctic Southern Ocean Whale Sanctuary, but now goes under the name of Hiyo Maru No 2, was destined to be scrapped in August this year 2010. The ship is now being scrapped in China.

It appears that the Institute of Catacean Research (the whale killing organisation) were unable to get another refuel and supply ship, it appears ship owners did not want a confrontation with conservationists and involvement with whale killers. Good news for our whales.