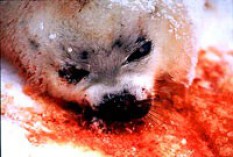 The cowardly seal killers have started their mass live slaughter of Grey seals, many under 12 weeks old. The cruel non civilized Canadian Government have told the seal killers that they can kill at least, on this one island alone, Hall Island, 1900 Grey seals, many are still alive when their fur is ripped off. On Hall Island there is approximately 2300 seals. There will be only 400 left.

This year the Canadian barbaric uncivilized government (which is not liked by most of it's people) is actually increasing the kill quota's.

The seal killing is unknowing paid for out of the Canadian tax payers money.

Dispite the EU ban on seal products in 2009 and world public outcry, the Canadian government has been looking for new takers of seals and baby seal products and yes, you probably guessed, they found their market, in China. A cruel deal has been struck between Canada and China for seal products, including the seals penis's as aphrodisiac's, is the world going mad?