GreenEcoPeace, but the world is not happy about this and conservationists and UK will strongly oppose it.

British Fisheries minister Hugh Rank-Davis said, 'there is still major differences, and we have got to end the practice of scientific whaling'.

GreenEcoPeace, this means that the Japanese are deceiving the world by saying they are doing scientific research when in actual fact they are slaughtering the whales, leaving them to die an agonising death, cutting them up on their factory ship and selling their meat on the Japans market. This is against all the rules. 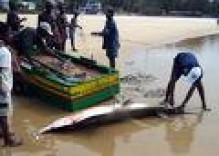 Costa Rica is no longer romantic and the nation of great tasting coffee, it is now a nation of ecological destruction, corruption, shark killers and rainforest destroyers.

Now on this once romantic island, sharks are ruthlessly killed and definned by one of the most evil shark destructive nations on earth, in the port of Puntarenas where it is controlled by a type of underworld. The cruelly killed sharks fins, are to be seen drying out on roof tops of buildings.

Sharks are disappearing from our oceans fast, last year 90 million sharks were killed, wiped out, mostly just for their fins, for shark fin soup.

Around the Cocos Island, there is virtually no sharks and now, more dangerous preditors have moved in, the giant squid, which will eat its own kind and kill humans. One of the sharks main food is squid, kill the sharks and the eco system is seriously affected. Killing off our endangered sea mammals, seriously affects the workings of nature. Kill off the eco system and you will slowly kill of the human species.

Japan has long claimed that it catchs whales for further science, but this is nonesense says, Nichola Raihani, Institute of Zoology London and Tim Clutton-Brock, Prince Phillip professor of Ecology and Evolutionary Biology, at the university of Cambridge.

The so called Japanese Research Whaling is condemed by the 'New Scientist'. The New Scientist has published an article explaning why Japans whaling activities are not research. The International Whaling Commission (IWC) 61st meeting starts this week 22nd June 2009 in Portugal. IWC should take a closer look at what the New Scientist has to say. The IWC should take away the permit, that allows the Japanese bogus Scientific Research and Commercial Whaling. The Japanese is violating the Antarctic Treaty, the regulations of the IWC, The Convention On The International Trade In Endangered Species (CITIES) and many other international regulations. The Japanese seem to be a law unto themselves and ignorant of regulations, that other countries obay.

by Nichola Raihani and Tim Clutton-Brock

In 1986, the International Whaling Commission (IWC) imposed a moratorium on commercial whaling to allow stocks to replenish. However, this ongoing ban allows member nations to grant themselves special permits to kill whales for scientific research, with the proviso that the whale meat is utilised following data collection.

Only Japan holds a special permit. Its current research programme, which started in 2000 and is run by the Japanese Institute of Cetacean Research (ICR), proposes to kill more than 1000 whales a year in the Antarctic and the western north Pacific. The stated objectives are to determine the population structure and feeding habits of several whale species, including endangered fin and sei whales, in order to "manage" stocks.

Japan has already been widely criticised for its whaling, which is generally seen as a thinly disguised hunting operation. But with the 2009 IWC meeting looming, it is worth rehearsing the arguments against scientific whaling.

Although Japan's early results produced useful information, recent advances in non-lethal techniques such as biopsies mean that data can now be obtained without killing whales. Similarly, it is no longer necessary to kill whales to work out what they have been eating, as this can be determined from DNA in samples of faeces.

The scientific impact of the research is also limited. Relatively little research is published in international peer-reviewed journals, compared with research programmes on other marine mammals such as dolphins. According to the ICR, scientific whaling has produced 152 publications in peer-reviewed journals since 1994. However, just 58 of these papers were published in international journals. The rest were IWC reports or articles published in domestic journals, largely in Japanese. Most of the findings are not circulated among the wider scientific community, and the failure to subject papers to impartial review renders the value of much of this literature questionable.

Whether the results from scientific whaling are useful for stock management has also been questioned. The Scientific Committee of the IWC has explicitly stated that the results generated by the Japanese Whale Research Program in the Antarctic (JARPA) "were not required for management". Independent research shows that the data may overestimate whale abundance by up to 80 per cent (Marine Ecology Progress Series, vol 242, p 295).

Finally, given that there is considerable variation in the capacity of different whale populations to recover from stock depletion (Marine Mammal Science, vol 24, p 183), the value of the research for understanding populations outside the Antarctic and western north Pacific - which may one day be reconsidered for commercial whaling - is limited. This fundamentally undermines the justification for scientific whaling.

Nichola Raihani is at the Institute of Zoology in London 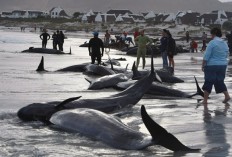 South Africa's Marine Coastal Management (MCM) organizer, butchering, bastard, bureacrat, False Whale Killer, Butcher Mike Meyer, out of 55 False Whales that were beached, he organized the unessary shooting of 44 whales. Get rid of him now! This is part of an email that was sent to Mike Meyer and many South African officials.

Get rid of him now, in England we are starting to take steps to boycott South African wines. I'm taking mine back today, the wine is Boschendal.

Whales are very intelligent mammals unlike the butcher of Kommetjie Beach Mike Meyer. We at GreenEcoPeace, world wide marine & conservation watch, are asking the government to get rid of him now, immediately. We are looking to see what you do before we commence a big national campaign in the UK, with pictures of the scene. Campaigners can be very powerful, we, through our constant campaigning, persuaded the European Parliament, to ban all seal products into Europe, therefore saving well over 200,000 baby seal's lives. Just like your Mr Mike Meyer, who ignored the pleas of helpers ordering them to back off the whales on the beach. He organized the shooting, one by one, of those innocent environmentally friendly whales, many of whom may have been returned back to the sea, to be reunited with their families. With the help of many volunteer helpers that were available and wanting to help, many of the False whales would have been saved.

Like it or not, this has put South Africa at the moment on the list of whale killing nations, killing by the bullet, get rid of Mike Meyer, he's a nightmeyer!

Apologise, show remorse openly and donate a little something to non-profit conservation organisations such as ours, who care, so we can constantly continue our work helping mammals, monitoring and giving proper advise to governments such as yours, South Africa.

Try everything before the bullet. 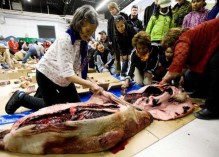 The representative of Her Majesty The Queen, the Governor General of Canada, Michaelle Jean, (far right) ate the still twittering, steaming, bleeding heart of a young seal, brought in especially alive, slaughtered and then knifed open so Michaelle Jean could cut out pieces of its young heart.

All this was done, just to please Michaelle Jean, probably in protest over the seal import ban by Europe.

Before her current roll in politics in Canada, Michaelle Jean's native country was Haiti, where animals are sacrificed for religous reasons and people bath in blood and the Caribbean Monk Seal is now extinct.

Michaelle Jean came to Quebec in Canada, she holds a French passport and somehow she is now the representative of our Queen in Canada.

Why is this woman Michaelle Jean getting her teeth into the heart of a young seal, while the poor seals heart is still twittering and after doing this, laughing with blood all over her face.

The Canadian government it seems is barbaric.

European Commissioner Stauros Dimas said, "I have no comment, its too bizarre to acknowledge". Former press secretary to the Queen, Dickie Arbiter was not amused, he said, "it's not what one expects a Governor to do, cutting open a seal and eating it".

Because of the recent seal import ban, to which GreenEcoPeace was involved in, Canada is now looking for new markets to sell its cruelly slaughtered baby seal products, countries such as Switzerland and Vietnam.

Canada's trade officials are even stooping to the lowest depth, by trying to sell the penis's of young seals, to the Chinese market, for male erection problems.

The Haitian fishermen, have driven the Caribbean Monk seal to extinction. It now seems that Michaelle Jean is proposing to do the same with the innocent Canadian seals. 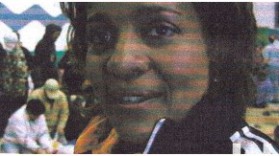 The representative of Her Majesty The Queen, the Governor General of Canada, Michaelle Jean, ate the still twittering, steaming, bleeding heart of a young seal, brought in especially alive, slaughtered and then knifed open so Michaelle Jean could cut out pieces of its dying young heart. All this was done, just to please Michaelle Jean, probably in protest over the seal import ban by Europe.

Before her current roll in politics in Canada, Michaelle Jean's native country was Haiti, where animals are sacrificed for religous reasons.