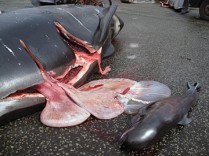 Baby whales cut out of their mothers womb by ruthless barbaric Faeroe Islanders. The Faeroe's are part of the Danish Kingdom, Denmark is in the EU, Denmark is a disgrace to the EU for allowing this to happen within their kingdom.

One whole large pod of 236 Pilot whales were happily swimming in the North Atlantic Ocean when they were driven by the Faeroe Islanders in to Klaksvik in the Danish Faeroe Islands. The whales were forced in to a cove, left helpless, stranded and then mercilessly hacked to death with knives by humans, called people, who's ages of those who knifed the whales ranged from 14 years upwards.

There were approximately 236 Pilot whales in all that were sickenly slaughtered, they included pregnant whales, juveniles and there male partners, many were brutally chopped around the head and they were growning in agony and taking up to 4 to 5 long long minutes to draw their last breath and helplessly die. 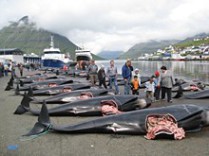 The whole of the cove was red with blood, which was oozing from the 236 ripped open innocent Pilot whales, chopped to death. The fear and panick of these highly intelligent innocent whales seeing their families slaughtered must have been beyond horrific.

Barbaric Faeroe Islanders every year mass butcher whilst still fully alive, whole families of whales that should be strictly protected, but are being completly wiped out.

Pilot whales are classified as 'Strickly Protected' under the convention on the Conservation of Wildlige and Natural Habitats. By allowing the slaughter to continue in the Faeroes, Denmark fails to abide by its obligations as a signatory of the convention.

Many thanks and praise to Peter Hammarstedt for his corrageous and dangerous undercover work and nodoubt what he witnessed, sadly he will never forget. 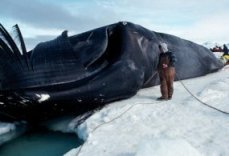 Greenland is not Indigenous and does not need a cruel whale killing quota. There is evidence that Greenland sells its whale meat. Greenland's claim of Indigenous, is a whole load of deceipt and lies. Greenland is part of the kingdom of Denmark, Denmark is in the European Union. The E.U. is against cruely slaughtering whales for commercial gain.

Fareo Isles also kills hundreds and hundreds of Pilot whales by dragging them into coves and knifing them. The whole sea is then blood red. Fareo Isles is also part of the Danish kingdom.

Sea Turtles Will No Longer Be Burned 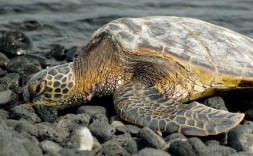 As the devastating reports of the BP oil spill and its harmful effects continue, a little good news reinforces some hope for a better future. Thanks to a lawsuit filed by The Center for Biological Diversity and Turtle Island Institute -- along with petitions and letters from the public -- BP and the U.S. Coast Guard have agreed to stop allowing endangered sea turtles to be burned alive during surface-oil cleanup operations.

Concern was sparked when news spread that BP was using controlled fires as a method to clean up the oil via dragging together fire-resistant booms and then lighting the enclosed "burn box" on fire. It has been reported that as of July 01, 594 stranded sea turtles had been collected in the Gulf area since the oil spill. Of those, 441 were already dead when they were found.

With over 12,000 signatures on two petitions demanding BP to stop the torching of sea turtles in the Gulf. A big thank you to all who continue to make efforts to help sea turtles and other victims of the BP oil tragedy. This burning ban will help prevent even more unnecessary deaths.

But it is important to remember that sea turtles are endangered and still need your help.