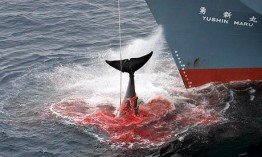 The whales are now jumping for joy as they watch the Japanese whale killers leave their Antarctic Whale Sanctuary.

Yes it's official, the Japanese whale killer ships the Yushin Maru No1, No2 & No3 and the floating slaughterhouse butcher ship the approx 8,500 tons the Nishin Maru and the hired Panamanian registered supply ship the Sun Laurel, have been forced out of the Antarctic Southern Ocean Whale Sanctuary by Paul Watson and a crew of 88 conservationists and their 3 ships.

An amazing feat in Antarctic Ice and a saving of over 900 whales. The Japanese whale killer ships set out to kill over 1000 of our prehistoric, sentient wonderful endangered and protected whales, but very unfortunately, with one killer whale ship the Yushin Maru No1 and the butcher ship the Nishin Maru, the cruel Japs working around the clock managed to horrificly slaughter approx 172 whales, 172 whales too many, 172 whales never to be replaced. People all over the world are now saying to Japan, leave the whales alone forever.

Will the Japs leave the whales alone? We will not know until the end of the year, to see if the Japanese whale killer fleet leaves for the Antarctic Sanctuary for whales with one main objective, to kill. We hope they don't, we hope common sense will prevail.

It must have been major for the Japanese government to call back the entire whale slaughter fleet. The government gave about 800,000 yen in subsidies to the whale killing programme and the whole cost of the whaling operation, wait for it! yes, cost 6 billion yen a year. The Japanese people are now questioning the government and saying "why are you killing whales, when we don't want to eat whale meat and we have a dwindling economy"? because of the whale and dolphin killing, lots of people around the world, are boycotting Japanese goods, if Japan see's sense and now takes this opportunity to put an end to it's large mammel killing programme, we would wish Japan, a speedy return of its lost business, due to the horrific slaughter of whales and dolphins.

A high price to pay for unwanted whale meat and the slaughtering of dolphins to eat or capture for a cruel life in zoo's. "remember the whale fim Free Willy".

One of the largest newspapers in Japan the Daily Yomiuri says, "Antarctic whaling is on the verge of disappearing" and they also go on to say, "that the whaling crews were worn out by being harassed and chased by conservationists at sea".

Amazing things for a Japanese newspaper to say.