Experiences From Our Colleagues 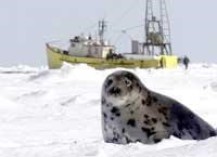 It can be very dangerous helping to protect, save and defend endangered species in the sea, in particular Whales, Dolphins and Seals and when there is money involved!

A courageous conservation ship blocked a seal killing ship from getting near a group of innocent defenceless baby seals. These seals were just about to suffer their fate, death, by being viscously struck with a nail club and most probably would have been skinned alive with screams like you have never ever heard before. We have to thank captain Paul Watson for his bravery. At a later stage captain Paul Watson was viciously attacked by these horrible seal slaughtering thugs for helping to protect the seals.
A ship is waiting, death is nearing.

A reporter interviewed a New Foundland politician who protested that captain Paul Watson was obstructing the sealing vessel, when asked what he thought should be done about it, the politician said, they should be shot! (meaning Captain Paul Watson) Canadian minister of Fisheries Brian Tobin responded by saying “I can understand the anger of these fishermen, (seal slaughters) so much so that it would motivate them to defend their industry with violence”. Robert Watson said “Governments that invade territory to defend oil wells, or to defend property, always try to justify their violence. But yet raising your voice to protest, in defence of whales, dolphins, seals, or other species, is often not even tolerated and you are often called an activist, what they are really trying to tell the public is that a conservationist is an activist which has a similar meaning to a terrorist, but of course this is just a ploy to make the conservationist sound bad and divert away from the real issue which is them wanting to cruelly slaughter innocent mammals for their gain.

Alison Watson freed under great danger to her life, 15 dolphins. The fun loving dolphins had been cruelly trapped in unescapable nets in the waters surrounding Taiji, Japan. The poor innocent dolphins were just about to be speared to death and any that were still alive would have had their throats cut (see picture). The Japanese dolphin killers were so angry with Alison for cutting their net, that they turned their boat on Alison and drove it straight over her, which nearly ended her life. Not satisfied with this, the dolphin slaughterer who was still in the water tried then to strangle Alison with a rope. Alison was now gasping for air and struggling now herself for survival against this brutal Japanese slaughterer of dolphins. This savage Japanese dolphin killer then grabbed Alison’s head with his huge strength and pushed her under the water to drown her. Under the water Alison managed to break free and swim away. All the dolphins escaped! Everything was captured on video. Alison and her colleague was arrested by the Japanese government for “Interference with Japanese Commerce” and they were sent to jail for 23 days. All they were doing was saving beautiful loving dolphins from slaughter. A million thanks to Alison and her colleague another million thanks for their bravery.