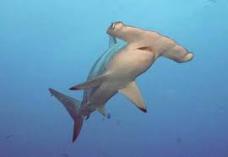 The Winghead Shark Eusphyra blochii is a species of hammerhead shark, family Sphyrnidae, named for the remarkably wide lobes on its head. It is the sole species in the genus Eusphyra. A small and harmless species, the Winghead Shark is commercially fished throughout much of its range.

The Winghead Shark is found in shallow water on the continental and insular shelves of the Indo-West Pacific, from the Perisan Gulf to the Philippines, north to China and Taiwan and south to Queensland and the northern territory of Australia. It sometimes enters the Brackish waters of estuaries.

The extremely long and narrow lateral head blades of the Winghead Shark called a "cephalofoil" distinguishes this shark from all other species. The width of the cephalofoil is 40-50% the body length. It is wing or arrow shaped from above with small bumps in front of the nostrils. Unlike in Sphyrna, the nostrils are placed closer to the center of the cephalofoil than the ends and have enormous lateral extensions that reach almost to the eyes. Its coloration is grey-brown above, paler below. This is a small shark, not more than 1.86 m long.

The cephalofoil of the Winghead Shark is so large as to be almost unwieldly, while the placemet of the nostrils and the ampullae of Lorenzini are wider than in non-hammerhead sharks (albeit more media than in other hammerhead sharks). Along with its basal position in hammerhead phylogeny, this lends support to the idea that this structure originally evolved for a sensory, rather than hydrodynamic function.

Like other hammerhead sharks the Winghead Sharkis viviparous with the embryos norished by a yolk sac placenta. Off Bombay, the young are birthed just before the monsoon season in April and May and mating takes place during the monsoon from June to August, suggesting a gestation period of eight months. Off Australia, the females give birth in February and March, after a gestation period of 10-11 months. Litters number 6 to 25 pups, with the young measuring 32-45 cm at birth. Females reproduce every year. Maturation occurs at around 110 cm.

The Winghead Shark is probably harmless to humans. It is a common fisheries species in India, Pakistan, Malaysia and Thailand and probably also in other parts of its range. It is caught with floating gillnets, fixed bottom gillnets, skate nets, seines, with floating and bottom longlines and probably on hook and line.

It is particularly common in catches off Kalimantan and Comprisea, small part of Australian commercial catches. The meat is utilized for human consumption. The liver is a source of high potency vitamin oil and the offal is probably utilized for fishmeal. There is no scientific data on its population status, though anecdotal accounts and market surveys suggest that it has likely declined in most of its range, except Australia.