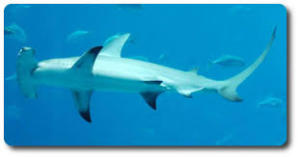 The Whitefin Hammerhead Sphyrna couardi, is a hammerhead shark, family Sphyrnidae, found in the tropical waters of the northeastern Atlantic Ocean, from Senegal to Congo. According to Cadenat and Blanche (1981), some specimens associated with the smalleye hammerhead (Sphyrna tudes) are in fact of the Whitefin Hammerhead, which would extend the range of the species into the Mediterrean Sea. McEachran and Serrett (1986) synonymized this species with the Scalloped Hammerhead (Sphyrna lewini).

In appearance the Whitefin Hammerhead is very similar to the Scalloped Hammerhead, with a moderately broad, narrow-bladed head (width 21-25% of total length). The front margin of the head is broadly arched, with prominent indentations in the middle and sides. The first dorsal fi is tall and falchate (sickle-shaped), while the pelvic fins are not falchate with straight or slightly concave rear margins. The anal fin is low and long, with a deep notch in the rear margin. The colour is blue-grey or grey-brown above, white below. It is distinguished from the Scalloped Hammerhead in that its head lobes are longer and less wide, the origin of its first dorsal fin are over the pectoral fin midbases and there are no dark tips on its pectoral fins. Its maximum size is said to be about 3 m long; adult males typically range from 141-184 cm, adult females 230-235 cm.

The Whitefin Hammerhead mainly feeds on benthic bony fishes, such as eels and flatfishes, as well as cephalopods. As with other hammerheads, they are viviparous, with the young nourished by a yolk sac placenta. Litters range from 24-28 pups, measuring 30-32 cm long or more. It is not known to have attacked people. This species is caught by West African fisheries but details are unknown.