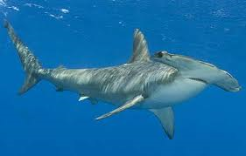 The Smooth Hammerhead, Sphyrna zygaena, is a large hammerhead shark, family Sphyrnidae, found in temperate seas worldwide. Its common name comes from the shape of its "hammer", which lacks a central indentation at the front. A relatively common shark, it is taken by a number of fisheries throughout its range and its fins are valued for shark fin soup. It is potentially dangerous to humans, but is believed responsible for very few attacks.

Smooth Hammerheads are the hammerhead species most tolerant of temperate water and can be found worldwide to higher latitudes than any other species. In the western Atlantic Ocean, it occurs from Nova Scotia south to the Virgin Islands and from Brazil to southern Argentina. In the eastern Atlantic, it occurs from the British Isles south to Cote d'Ivoire, including the Mediterranean Ocean. In the western Indian Ocean, it is found off South Africa, India and Sri Lanka. In the western Pacific Ocean it occurs from the Gulf of Tonkin to southern Japn and Siberia, to Australia and New Zealand. It also occurs off the Hawaiian Islands in the central Pacific and California, Panama, the Galapagos, Ecuador and Chile in the east. This species has been considered amphitemperate (absent from the tropics) in distribution, but it has been reported from tropical waters such as the Gulf of Mannar off India and off southern Mozambique. Its tropical distribution is spottily known due to confusion with other hammerhead species.

Compared to the Scalloped and Great Hammerheads, the Smooth Hammerhead stays closer to the surface, less than 20 m (65 ft) deep. However, it has been reported to a depth of 200 m (656 ft). It ranges from inshore waters, including bays and estuaries, over the continental shelf, to offshore. It has also sometimes been reported entering freshwater haitats, such as in the Indian River in Florida. In the summer, Smooth Hammerheads migrate poleward to cooler water, sometimes forming large schools and return in the winter.

The second largest hammerhead next to the Great Hammerhead, the Smooth Hammerhead typically ranges between 2.5 to 3.5 m (8 to 12 ft) long, with a maximum length of 5 m (16 ft) and a maximum weight of 400 kg (880 lbs). The Smooth Hammerhead is distinguished from other large hammerheads by the shape of its hammer shaped head, or "cephalofoil", which is broadly rounded and lacks a central indentation at the front. The cephalofoil is broad but short lengthwise, its width measuring 26 to 29% of the body length. The teeth are triangular, smooth to weakly serrated, numbering 13 to 15 on either side of the upper jaw and 12 to 14 in the lower jaw with a single symphysial tooth.

Adult Smooth Hammerheads are either solitary or form small groups. In some locales such as off the eastern Cape of South Africa, juveniles under 1.5 m long form enormous migratory schools of over a hundred individuals. During hot summer weather, they can be seen swimming close to the surface with their dorsal fins exposed.

The Smooth Hammerhead is an active predator of bony fishes and cephalopods, also taking smaller sharks (including of its own species) and rays, shrimp, crabs and barnacles. In inshore habitats, its favorite prey are skates and stingrays, which comprise a majority of its diet. The venomous bars of stingrays are often found lodged in and around the mouths of these sharks; one examined specimen contained 95 such spines. In northern Europe, the Smooth Hammerhead feeds on herring and seabass, while in North America it takes Spanish makerel and menhaden. They have also been observed scavenging from surface longlines in the Mediterranean Sea. Off South Africa, the Smooth Hammerhead feeds on small schooling fish, such as pildhard and squid over the deep coral reefs at the edge of the continental shelf, with individuals over 2 m long taking increasing numbers of smaller elasmobranchs.

Like other hammerheads, the Smooth Hammerhead is vivparous, with the young nourished inside the mother by a yolk sac placenta. Females bear relatively large litters of 20 to 40 pups after a gestation period of 10 to 11 months. The pups measure approximately 50 cm (20 in) long at birth; females reach maturity at 2.7 m (8.8 ft) and males at 2.1 m to 2.5 m (7 to 8 ft) in length, depending upon locality. Off South Africa, newly mated females have been caught in February and females with full term embryos in November, off the east coast of Australia, birth takes place between January and March, with ovulation taking place around the same time. Its life span is believed to be 20 years or longer. Young Smooth Hammerheads are preyed upon by larger sharks such as the dusky shark; adults have been observed being consumed by killer whales off New Zealand.

The Smooth Hammerhead may be potentially dangerous to humans. The International Shark Attack File lists 21 unprovoked attacks attributed to Sphryna hammerhead sharks; however, due to the Smooth Hammerhead's occurence in temperate regions where humans are less likely to enter the water, relatively few attacks can be attributed to this species. Off southern California, it has been reported stealing catches from sportsfishermen and divers.

The shark fisheries of south Florida and the West Indies take Smooth Hammerheads for meat, which is utilized fresh, dried-salted and smoked. However, in most markets the meat is considered undesirable and there are reports of it causing poisoning. The liver oil is used in vitamins, the hides for leather and the carcasses for fishmeal. It is also used in Chinese medicine and it has the highest rated fins for use in shark fin soup in the Asian market. Most individuals are caught by gillnets and longlines and there is believed to be significant mortality of this species in longline and driftnet fisheries. At present, this species is relatively common and assessed as "Lower Risk/Near Threatened" on the IUCN Red List. Off New Zealand, it is a prohibited target species and is the most abundant shark along the northwest coast. It also does not appear to have been negatively impacted by fishing off the southern coast of Australia.