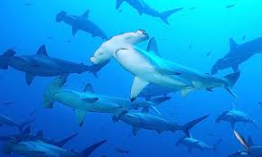 The Scalloped Hammerhead, Sphyrna lewini, is a hammerhead shark of the family Sphyrnidae. Originally Zygaena lewini, it was later moved to its current name. The Greek word sphyrna translates into "hammer" in English, referring to the shape of this shark's head.

This shark is also known as the bronze, kidney-headed or southern hammerhead. It primarily lives in warm temperate and tropical coastal waters all around the globe. It is the most common of all hammerheads.

The most distinguishing characteristic of this shark, as in all hammerheads, is the 'hammer' on its head. The shark's eyes and nostrils are at the tips of the extensions. The maximum length of the scalloped hammerhead is 4.3 m and the maximum weight 150 kg.

This shark is often seen during the day in big schools, sometines numbering hundreds.

They are not considered dangerous and are normally not aggressive towards humans.

This shark feeds primarily on fish such as sardines, mackerel and herring and occassionally oncephalopods such as squid and octopus. Larger specimens may also feed on smaller species of shark such as the blacktip reef shark, Carcharhinus melanopterus.