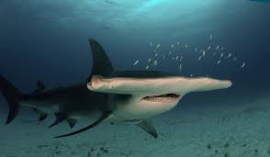 The Great Hammerhead, Sphyrna mokarran, is the largest of the hammerhead sharks, family Sphyrnidae, growing up to 6.1 m (20 ft) long. It is found worldwide in tropical and warm temperate waters, inhabiting coastal areas and continental shelves. Although large and capable of causing harm to humans, this shark is generally shy and there are few attacks attributed to it. Its population is declining in many areas of the world due to overfishing.

The range of the Great Hammerhead is circumtropical. In the Atlantic Ocean it occurs from North Carolina to Uruguay, including the Gulf of Mexico and the Caribbean Sea, fromm Morocco to Senegal, including the Mediterranean Sea. It is found widely in the Indian Ocean and the Indo-Pacific from the Ryukyu Islands to New Caledonia and French Polynesia. In the eastern Pacific Ocean, it occurs from southern Baja California south to Peru. Its presence is uncertain in Gambia, Guinea, Mauritania, Sierra Leone and Western Sahara.

Great Hammerheads are found from inshore marine waters to well offshoure to a depth of 80 m (230 ft), including over the continental shelf and island terraces, in lagoons, in deep water near land. It often favors continental and insular coral reefs. They are nomadic and migratory; the Florida and South China Sea populations have been documented moving poleward in the summer.

The streamlined body form of the Great Hammerhead with the characteristic head lobes is typical of the hammerhead sharks. Adult Great Hammerheads can be distinguished from other large hammerheads, such as the Scallped Hammerhead (Sphyrna lewini) and the Smooth Hammerhead (S.zyaena), by the shape of its "hammer", which has a nearly straight front margin (as opposed to arched), with prominent medial and lateral indentations. The width of the hammer is 23-27% of the body length. The teeth are triangular and strongly serrated, becoming more oblique towards the corners of the mouth. There are 17 teeth on either side of the upper jaw along with 2-3 teeth at the symphysis; the lower jaw has 16-17 teeth on either side and 1-3 at the symphysis.

The first dorsal fin is very high and stongly falcate (sickle-shaped), while the much smaller second dorsal fin is also tall and has a concave rear margin. The pelvic fins are strongly falcate with concave rear margins, which differs from the straight margined pelvic fins of the Scalloped Hammerhead. The Great Hammerhead is dark brown to light grey or even olive above, fading to white on the underside. The fins are unmarked in adults, while the ape of the second dorsal fin may appear dusky in juveniles.

An active predator with a varied diet, the Great Hammerhead's prey ranges from invertebrates such as crabs, squid, octopus and lobsters, to bony fish such as groupers, catfishes, jacks, grunts, flatfishes and small sharks such as smooth-hounds. They have also been reported to be cannibalistic. However, their favorite prey items are rays and skates, especially stingrays. The venomous spines of stingrays are frequently found lodged inside their mouths and do not seem to bother the shark; one specimen had 96 spines in and around its mouth. They primarily hunt at dawn or dusk, swinging their heads in broad angles over the sea floor so as to pick up the electrical signatures of stingrays buried in the sand through their ampullae of Lorenzini. The shapes of their heads may also contribute to their maneuverability, allowing them to quickly turn around and strike at rays once detected. Off Florida, large hammerheads are often the first to reach newly baited sharklines, suggesting a particularly keen sense of smell.

Another function of their hammer-shaped heads is suggested by an observation of a Great Hammerhead attacking a southern stingray: the shark first knocked it to the sea bottom with a powerful blow from above, then pinned it with its head while pivoting to take a large bite from each side of the ray's pectoral fin disc. This effectively incapacitated the ray, which was then picked up in the jaws and sawed apart with rapid shakes of the head. A Great Hammerhead has also been seen attacking a spotted eagle ray in open water by taking a massive bite out of one of its pectoral fins. Once incapacitated, the shark once again pinned it to bottom and pivoted to take the ray in its jaws head first. These observations suggest that the Great Hammerhead seeks to incapacitate rays with the first bite, in a strategy similar to that of the Great White Shark and that the shape of its head is an adaptation for prey handling.

As with other hammerhead sharks, Great Hammerheads are viviparous, with the developing young nourished by a yolk sac placenta. Unlike most other sharks, which mate on or near the bottom, Great Hammerheads have been observed mating near the surface of the water. In one account from the Bahamas, a mating pair ascended while swimming around each other, mating when they reached the surface. Females breed once every two years, giving birth in late spring or summer in the Northern hemisphere after a gestation period of 11 months. The litters range from 6-55 pups, although 20-40 is typical. The young measure 50-70 cm at birth; off Australia the males reach maturity at 2.25 m (7.4 ft) long and 51 kg (113 lbs) and the females at 2.1 m (6.9 ft) and 41 kg (90 lbs). The young differ from the adults in having a rounded frontal margin on the head.

With its large size, the Great Hammerhead is regarded as potentially dangerous to humans. The International Shark Attack File lists 21 unprovoked attacks (2 fatalities) to hammerhead sharks of the genus Sphyrna. However, few (if any) attacks can be attributed specifically to the Great Hammerhead to the difficulty in identifying the species involved. When encountered underwater, they are generally shy unless presented with bait. Sometimes they approach divers, but are usually unaggressive. Nevertheless, they should be treated with care.

The Great Hammerhead is regularly caught both commercially and recreationally in the tropics by longlines, fixed bottom nets, hook-and-line, and trawls. Though their meat is rarely consumed, their fins are valued for shark fin soup. In addition, their skin is processed into leather, their liver oil is used for vitamins and their carcasses are ground into fishmeal. The Great Hammerhead is also taken unintentionally as by-catch and suffers very high mortality, over 90% for fisheries in the northwest Atlantic and the Gulf of Mexico.

The Great Hammerhead is extremely vulnerable to overfishing due to its long generation time. It is listed as globally Endangered by the IUCN Red List, and as Critically Endangered in the eastern Atlantic along the coast of Africa, where stocks have collapsed with an estimated 80% decline in the past 25 years. In the southwest Indian Ocea, catch rates have declined 73% from 1978 to 2003, though it is uncertain whether these figures represent localized or widespread depletion. Fishing continues in many parts of the Great Hammerhead's range; large numbers of longline vessels operate illegally along the coasts of the western Indian Ocean for hammerheads and the giant guitarfish and there has been a large increase in illegal, unreported and unregulated fishing in northern Australia, possibly reflecting the increasing value of this species for its fins.