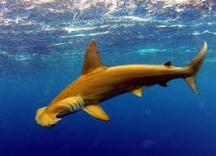 The Golden Hammerhead or Smalleye Hammerhead Sphyrna tudes, is a small subtropical hammerhead shark, family Sphyrnidae, native to coastal waters from Venezuela to Uruguay. The name "Golden Hammerhead" comes from its highly distinctive, bright metallic gold coloration, which was only documented by science in the 1980s. The colour is derived from pigments obtained through the shark's diet. Frequently caught as by catch at all stages of life, the Golden Hammerhead is increasingly threatened by fisheries in its range.

The Golden Hammerhead is a small shark, measuring up to 1.34 m for a male and 1.48 m for a female and weighing up to 9 kg. It has a streamlined, moderately slender body typical of the hammerhead sharks. The hammer shaped head is wide, measuring 28-32% of the body length, but broad lengthwise. The front margin is broadly arched, with an indentation in the middle and two more on the sides. There are 15-16 rows of teeth in the upper jaw and 15-17 in the lower; the teeth have smooth edged cusps that are oblique in the upper jaw and erect in the lower. Its eyes are proportionally smaller than those in other hammerhead species, hence its earlier common name.

The mos distinctive feature of the Golden Hammerhead is its metallic yellow, golden, or orange colour. Its dorsal fins and back are gray or yellowish gray, while the margins of the head, flanks, belly and remaining fins (pectoral, pelvic and anal) are bright yellow or orange. The golden colour is brightest in individuals 55-70 cm long and tends to fade once the shark reaches sexual maturity. Newborns are gray above and pale below, with dark tips on the first dorsal fins and the upper caudal fin lobe. Juveniles up to 45 cm long have yellowish gray above and yellow below, changing to gray above and orange below at 50 cm.

Little generally is known of the habits of the small hammerheads of the tropical Americas. The Golden Hammerhead is the dominant hammerhead in the shallow waters of the Orinoco Delta. It shares its range with two other small hammerheads, the Scoophead (Sphyrna media) and the Bonnethead (S.tiburo), as well as the larger Scalloped Hammerhead (S.lewini) and Great Hammerhead (S.mokarran). These species avoid competition with each other by habitat and diet specializations. The Golden Hammerhead prefers muddier water than the other species, which may be reflected by its smaller eyes as vision would be of lesser importance under those conditions. Adult male Golden Hammerheads and juveniles of both sexes form schools of uniform size, while females are apparently solitary.

Subadult and adult Golden Hammerheads feed primarily on bony fishes, in particular marine catfish of the family Ariidae and their eggs. Young Golden Hammerheads under 67 cm long feed mainly on penaeid shrimp. This diet is the source of the carotenoid pigment that gives this species its golden colour. The juveniles pick up the pigment from the shrimp, while older individuals acquire it from ariid catfish and their eggs, both of which are coated in a bright yellow mucus. It is unclear whether the pigment in the catfish also comes from shrimp. Another shark species in the area, the yellow smooth hound (Mustelus higmani), feeds on shrimp and also has a yellowish coloration. Additional food items include grunts, squid, swimming crabs and newborne Scalloped Hammerheads.

Like other hammerheads, Golden Hammerheads are viviparous, with the embryos developing inside a placenta and nourished by the mother through an umbilical cord. Fertilization is internal via male claspers. The Golden Hammerhead has a distinct annual reproductive cycle, with the females ovulating at the same time as gestation and conceiving shortly after giving birth each year. Its reproductive habits vary across different parts of its range. Off Trinidad, females reach maturity at a length of 98 cm and males at 80 cm. Mating and conception occurs in August and September. The gestation period last 10-11 months, with young being birthed in late May and June. The litter size ranges from 5 to 12, with the newborns measuring 30-31 cm long. Off Maranhao state in northern Brazil, females reach maturity at around 114 cm and the males 92.1 cm,  considerably larger than off Trinidad. Pregnant females were observed from June to October and also from January to April, while the relatively largest gonads in males were observed from May to November and in March. The litters range between 5 to 10 pups. There is a strong relationship between fecundity and female size.

Golden Hammerheads of all sizes are regularly caught as by catch in gillnets and by shrimp trawlers throughout its range; in Trinidade and Tabago it is one of the most abundant sharks in market catches and is known as the golden or yellow hammerhead to local fishermen. Marked declines in Golden Hammerhead catches have been reported in Trinidad and in northern Brazil. The limited reproductive capacity of this species, the increasing fishing pressures in its range and its susceptibility to capture, have led it to be assessed at "vulnerable".