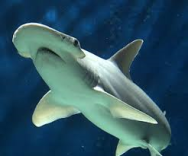 The Bonnethead Shark or Shovelhead Sphyrna tiburo, is a member of the hammerhead shark genus Sphyrna. Tiburo is the Taino (Native American) word for shark.

On average Bonnethead Sharks are about 1 m (3.4 ft) long, being the smallest hammerhead shark.

This species lives in the Western Hemisphere where the water is usually warmer. It ranges from New England, where it is rare, to the Gulf of Mexico and Brazil and from southern California to Ecuador. During the summer it is common in the inshore waters of the Carolinas and Georgia; in spring, summer and fall, it is found off Florida and in the Gulf of Mexico. In the winter the Bonnethead Shark is found closer to the equator, where the water is warmer.

The Bonnethead Shark is an active tropical shark that swims in small groups of 5 to 15 individuals. Curiously however, schools of hundreds or even thousands have been reported. Bonnethead sharks move constantly following changes in water temperature and to maintain respiration. The Bonnethead Shark will sink if it does not keep moving since hammerhead sharks are among the most negatively buoyant of marine vertebrates. The Bonnethead Shark uses a special body fluid, called "cerebrospinal fluid" or "C1-excess", to let other know it is nearby. It also utilizes an electric field sensing system similar to radar. This system allows the Bonnethead Shark to position itself for biting prey within a few feet where its eyes are least able to assist. This shark is not dangerous to humans.

It feeds primarily on crustaceans, consisting mostly of blue crabs, but also shrimp, mollusks, faces and small fishes. Seagrasses have been found in its stomach contents. Their feeding behavior involves swimming across the seafloor, moving its head in arc patterns like a metal detector looking for minute electro magnetic disturbances produced by crabs and other creatures hiding in the sediment. Upon discovery, they sharply turn around and bite into the sediment where the disturbance was detected. If a crab is caught, the Bonnethead Shark uses its teeth to grind its carapace and then uses suction in order to swallow the crab whole.

To accommodate the many types of animals that it feeds on, the Bonnethead Shark has small, sharp teeth in the front of the mouth (for grabbing soft prey) and flat, broad molars in the back (for crushing hard shelled prey).

The reasons for cephalofoil has scientific debate for more than a decade.  Whatever the ultimate purpose, a wing shaped cephalofoil allows hammerhead sharks to swim on a horizontal plane and was thought to give them the ability to execute sharp turns. However research shows that it is the vertebrae that help them execute sharp turns. The cephalofoil is responisble for better electroreception (using ampullae of Lorenzini) and heightened olfactory acuity.