A proposal to ban international trade in Atlantic bluefin tuna, which is a sushi mainstay in Japan, has been rejected by a UN wildlife meeting.

Thursday's decision occurred after Japan, Canada and many poor nations opposed the measure on the grounds it would devastate fishing economies.

Monaco tabled the plan at the meeting of the Convention on International Trade in Endangered Species (CITES).

Stocks have fallen by about 85% since the industrial fishing era began.

Monaco argued that the organisation responsible for managing the bluefin fishery - the International Commission for the Conservation of Atlantic Tunas (Iccat) - had not implemented measures strict enough to ensure the species' survival.

Scientists and campaigners working with conservation organisations were disappointed with the outcome.

"We think it is quite a blow," said Glenn Sant, leader of the global marine programme with Traffic, the international wildlife trade monitoring network.

Iccat has not been able to demonstrate that it is able to implement procedures that will lead to [the bluefin's] recovery.

"There was really no question that it met the [scientific] criteria for listing," he told BBC News from the conference in Doha, Qatar.

"Listing" is the technical term for imposing restriction on international trade through CITES.

Bluefin tuna was slated for listing on Appendix One - a complete ban.

Mr Sant was a member of the expert panel convened last year by the UN Food and Agriculture Organization to examine whether the Atlantic bluefin's plight was severe enough to meet Appendix One criteria.

A majority of the panel believed it did, though consensus was not achieved. Earlier, Iccat's scientific advisers had concluded a trade ban was justified.

The US, which supported and lobbied for the ban, also described the outcome as "disappointing".

"Today's vote was a setback for the Atlantic bluefin tuna," said Tom Strickland, head of the nation's CITES delegation.

"But we will keep fighting to ensure that the fishery is managed sustainably, so that future generations may see it return to health."

US officials said they would be pressing governments to live up to promises to control fishing through Iccat.

Japan - the principal bluefin-consuming nation - had made its opposition to the proposal clear before the CITES meeting started.

It argues that commercial fisheries should be managed through bodies such as Iccat.

The debate - described by one observer as "passionate" - saw two votes.

The first, on an EU amendment that weakened the original Monaco proposal but still endorsed the ban, was defeated by 72 votes to 43 in a secret ballot.

(The EU is supposed to vote as a bloc in these negotiations. Nations with active tuna fleets such as France, Italy and Spain had been unwilling to support an outright, immediate ban.)

The vote on the original motion then went down by 68 votes to 20.

In theory, EU nations had to to abstain on the second vote as not all delegates had authority from their governments to vote for it.

However, some - including the UK - did support the motion, BBC News has learned - a move that potentially risks sanctions from the European Commission.

Sue Lieberman, director of international policy with the Pew Environment Group, suggested lobbying from the fishing industry was ultimately responsible for the defeat.

"This meeting presented a golden opportunity for governments to take a stand against overfishing, and too many governments failed to do so," she said.

"The market for this fish is just too lucrative, and the pressure from fishing interests too great, for enough governments to support a truly sustainable future for the fish."

CITES votes can be reviewed on the meeting's final day, but the substantial margin of defeat suggests this one will not be.

Earlier in the day, a US-sponsored motion seeking to ban international trade in products made from polar bears was also defeated.

Opponents argued that the species' main threat was not trade, but climate change. Some conservation groups - including Traffic - did not support the proposal, therefore.

There were also concerns that banning the trade might hurt indigenous peoples around the Arctic who sometimes hunt the bears for meat. 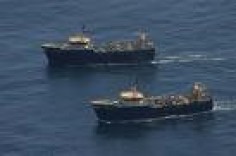 Pair Trawling the Scurge and Devastation of the Seas

Pair Trawling is just like two giant road sweepers, one either side of the road with a large net in the middle connected to both road sweepers. The pair of road sweepers then set off together to drag their nets down the High Street to trawl for rubbish. But on the way as well as cleaning they scoop up everything, cars, bikes, people, children and animals etc. Now this way you can begin to understand and start to imagine the devastation that this action would cause. Well this is what is happening in the sea, two trawlers place and attach a huge net between two boats to catch fish. The trawlers are go along at 8 to 9 knots scooping up fish and then dolphins, whales and mammals get trapped in the nets and they suffer often an agonising death.

World wide approximately 350,000 mammals a year are being seriously injured and killed. It is estimated that about 10,000 whales, dolphins, seals and porpoises die each year around the Uk and French coasts, many of them after being caught up in sea bass pair trawling nets.

We have got to campaign and stop the European pair trawling within the twelve mile zone, from the British coast line. The European countries are the ones who pair trawl for sea bass the most. Pair trawling is disasterous to mammals.

Two of the main french pair trawling ports that the French pair trawlers leave from and come into UK waters are Lorient, France and St Nazair, France. Contact the fisheries department from both these ports either by email or writing and tell them that you are very concerned about the pair trawlers trapping whales, dolphins and seals in their nets. Also tell the fisheries department that you have heard that the fisher men stab the mammals in the rear between the tail fluke and tail stock and drop them back into the sea, so they will slowly drown. Ask for their comments, please email us and let us know what they have to say and we will take it further, if the comments are not satisfactory.

GreenEcoPeace relies on Donations for merchandise & Donations from people like you. Please give generously to help keep us going. Thank you.