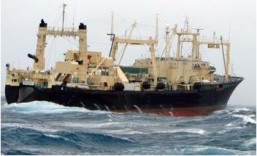 A DISASTER WAITING TO HAPPEN

Large factory ships like the Japanese Nissin Maru with over 1½ million litres of diesel, oil and hazardous chemicals on board should never be allowed anywhere near the beautiful waters of the Antarctic treaty sanctuary region in the Southern Ocean. They should be banned! Because if a major accident had to happen, as in the case of the giant Japanese factory slaughter whaling ship the Nissin Maru, which is the largest whaling factory ship in the world and which suffered serious fire damage and started to list and was out of action for 10 days and was in extreme danger of sinking. The thoughts of what could have happened is unthinkable.

1½ million litres of diesel, oil, plus huge amounts of hazardous chemicals, would have spilt into the crystal clear waters of the Antarctic treaty sanctuary region of the Southern ocean. Can you just imagine the serious damage that would have caused to the diverse variety of marine life. It would have wiped out nature, penguins, fish, whales, seals and all marine life that came into contact with it.

This is the Japanese Nissin Maru that caught fire. The floating slaughter house and factory whale processing ship. Seen here in the Antarctic Treaty region of the Southern Ocean Sanctuary for Whales.

It's really unthinkable, all those stunning icebergs and Antarctic ice, would have been saturated in thick black dirty diesel, furnace oil and hazardous chemicals such as ammonia and the stench would have been sickening. If such a catastrophe had to happen in the Antarctic sanctuary treaty region of the Southern Ocean it would probably be the worlds greatest loss of marine life and the worlds greatest ecological catastrophe.

Stop these giant Japanese factory ships entering the antarctic before it's too late! Write to your MP.

Write to the Japanese embassy and Japans ministry of Fisheries. Also to the Prime Minister of Japan and all the whaling nations. Tell them how you feel, write every week if you can. See Sample Emails.

We need you to help us!